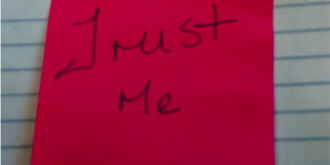 As long as I can remember I’ve had issues with trusting others. Maybe it’s due to countless broken promises, disappointments, or the sting of rejection. Honestly, I don’t really know where this distrust originated; but over time it has become hard for me to believe the words of others. 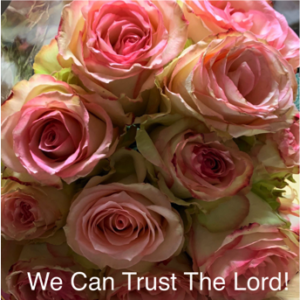 One can find herself in a constant state of anxiety when she can’t, or should I say doesn’t want to take others at their word. She is always waiting for the “other shoe to drop”, or for a last-minute cancellation. The fear of letdown has distorted her view, and it had distorted mine too.

I remember hearing a popular statement throughout my life that became imbedded in my memory, and many of you have probably heard this statement also: “Always leave room for disappointment”. While it is wise to have a contingent plan at times; I believe this statement almost guarantees a lack of confidence in others causing a “just in case” way of thinking instead of “I’ll believe you until you show me differently” type of thinking.

So, it’s no wonder I had trust issues! I always led with “what if”, never fully accepting that someone would do what they said they would do. And what’s worse is I used to tell my children the same thing, thinking I was shielding and protecting them from disappointment, only to realize that I was setting them up to question everything about everyone.

It took me several years to realize that because we are human, our “humanness” will always disappoint someone. Romans 12:2 refers to the renewal of our minds, and as I began to mature spiritually, I exchanged my worldly view of others and saw them as God does; realizing that even the nicest, most loyal, and dependable person will fall short of expectations at some point or another, and those of us on the “Trust Issues” team will also.

But there is hope. What if I told you there is someone who never breaks a promise, disappoints or rejects, someone whose word is absolute, perfect and trustworthy. Aren’t you glad that we can always take the Lord at His word? Even when He closes doors, we can rest assured that He always, not sometimes, but always has our best interest at heart. He is completely incapable of breaking His promises.

Psalms 9:10 states “And those who know Your name put their trust in You, for You, O Lord, have not forsaken those who seek You”.

The same way I stand in agreement with others believing you will move in their lives, is the same way I want to believe you will do that and even more for me. When doubt creeps in as it will, I will stand on this truth: “For no matter how many promises God has made, they are “Yes” in Christ. And so through Him the “Amen” is spoken by us to the glory of God.”   2 Corinthians 1:20

Lord help me with my unbelief. I want to fully accept what You have said in your word; and not just part of it, but all of it. Please strengthen and sustain my faith. I want desperately to take You at your word.

As We Approach the New Year – Carry the Lesson, Not the Shame by Andra Pape
January 8, 2020

Merry Christmas from the Choosing Him Family
December 24, 2019

That’s All That Matters by Annette Burrell
December 18, 2019

When the Decorations on the Tree Don’t Bring Joy by Andra Pape
December 9, 2019