As We Approach the New Year – Carry the Lesson, Not the Shame by Andra Pape

The only time I ever saw my grandfather cry with disappointment involved me and a box of straws. I know. It sounds weird, but it’s completely true. There are a few things you should know before I explain this story. My grandfather was an exceptional man (much like my father, his son, even though he is too humble to admit it.) His integrity was beyond reproach. He had patience with anyone and everyone. He was a God-fearing man who humbly helped anyone in need. And, in my personal opinion, I was his favorite. Sorry to all my cousins…but 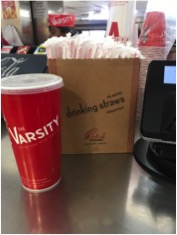 it was “kinda” true. He loved us all, but I held a special place in his heart. He built me a stool to teach me how to walk. He bragged to anyone who would listen that I was “so smart.” He told everyone that I was a writer even though I had never been published. He thought I had the singing voice of an angel and never missed an opportunity to hear me sing. And I adored him. Not in the way he deserved. I was young and too naive to realize that grandparents aren’t around forever. As I got older, I didn’t spend enough time with him. I didn’t call as I should. I was busy expanding my own life. And he never held it against me. He loved me as if I were, as he would say, “spun gold.” But that’s not my story.

My story happened much earlier in my life. I was probably 8 or 9. My twin sister and I had the astounding privilege of only having boy cousins. I guess some people might not like that, but my sister and I loved it (and still do). Every year my family would have a big Christmas party and after presents were opened, my grandfather would load up all five grandkids and take us to ride the Pink Pig around the big Christmas tree on top of the Rich’s building. And then afterwards, we would stop on the way back home at The Varsity to eat dinner. It was such a fun tradition!

With three older boy cousins, mischief was always bound to happen. I mean, Chris, Court and Chip were the ones who taught me and Leah how to play poker before I could do my multiplication tables! So it’s safe to say, things happened when we all got together, and that day, in particular, was no different.

If you’ve ever eaten at the Varsity, you are familiar with the jumbo boxes of straws that are everywhere throughout the restaurant. I don’t know whose idea it was, but we devised a plan to “take” a box of Varsity straws with the idea that we would attach all of them together to make a giant jump rope when we got back to my grandparent’s house. I don’t remember how we smuggled them out, but we were brilliantly successful. And an hour after getting back to the house, we had fashioned a giant straw, jump rope. We were starting to test it out on my grandparent’s wraparound porch when my grandfather came out to see what we were up to. That moment was a game changer. His face fell as he assessed the situation, saw the empty Varsity straw container and asked us, “Did you steal straws from the Varsity?” Until that very moment, I hadn’t even considered it stealing. I mean…they were free to take. But then the gravity and realization of what we did hit me like a boulder as my grandfather’s eyes welled up with tears of disappointment. My heart broke that day. Absolutely broke. I’ve never felt so ashamed and devastated for hurting someone I loved so much. And I never….never ever never stole anything again. Ever. In fact, if someone accidentally gives me too much change back, I will return it as soon as I realize the mistake. It was a good lesson to learn early in life. The Holy Spirit (and my grandfather) convicted me so much that it changed me for the better. But…It took years for my 9-year-old self to let go of the shame I felt for what I did and how much I had hurt my grandfather. We never spoke of it again. I’m sure he forgave us and forgot the event entirely. But I didn’t. And I struggled for a long time with the shame.

My grandfather died of a massive stroke when I was a freshman in college. He only lasted a few days after the stroke, he couldn’t communicate. My adult self never told him how sorry I was for letting him down. It wasn’t until years later, after growing in my faith, that I realized I was holding on to the wrong part of the lesson. That day, my grandfather wanted me to learn what I had done was wrong, but he never intended for me to walk in the shame of my actions. Jesus is the same. There have been many wrong decisions I’ve made in my life. Some have been as simple as being cross with someone who didn’t deserve it and other actions have left me on my knees begging God for forgiveness. In all of my brokenness I’ve learned one big thing: God wants us to carry the lesson we learn, not the shame. Let Him take that shame. It’s not your burden. When we repent, we need to put down our shame and walk in the knowledge that God has forgiven us and He wants us to move forward. I’m reminded of 1 John 1:9,

“If we confess our sins, he is faithful and just to forgive us our sins and to cleanse us from all unrighteousness.”

“I, even I, am he who blots out your transgressions, for my own sake, and remembers your sins no more.”

As we start this new year, there are a lot of reflections on our past and future. Let’s fall to our knees and ask for forgiveness of our sins. And let’s learn the lesson and leave the shame. It’s not our burden to carry into 2020. Happy New Year, sweet friends! May God bless each one of us! 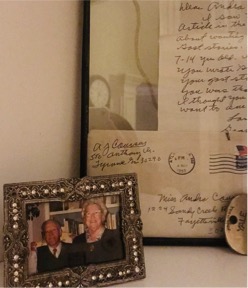 My Grandfather and a framed letter he sent me in high school about a writing contest he wanted me to enter. I recently found this letter in an old high school scrapbook and it has become a treasured item!

Parenting With Grace In Mind by Elizabeth Melville
March 2, 2022

A Woman of Honor by Annette Burrell
February 8, 2022

A Woman of Prayer by Annette Burrell
February 1, 2022