Blessings Among the Unexpected by Annette Burrell

I was eight years old when we got the news. My mother was going to have another baby. “It was 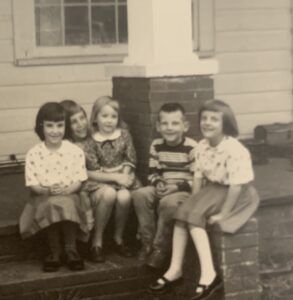 totally unexpected,” she said and then added, “I thought I was done having kids.” The five excited children, myself included, began jumping up and down with joy! My brother, the only son, was the most excited out of all of us. He wanted a brother so bad. And we all began secretly praying that my mother’s next child would be a boy.

In 1967 there were no ultrasounds or other tests to determine the sex of a baby inside the womb, nor had there been any tests that would have prepared my mom and dad for twins in 1958. I’m not sure which news was more surprising or unexpected – the news of twins on the day of our birth, or the news of another pregnancy when it hadn’t been planned. I don’t know, but God had known all along. 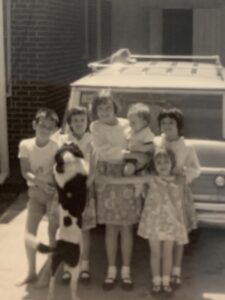 Jeremiah 1:5 “Before I formed you in the womb I knew you, before you were born I set you apart; I appointed you as a prophet to the nations.”

On August 1, 1967 a baby boy, named David Lee, was born at Hall County Hospital an hour and a half North of where we lived. When we met that sweet little baby boy, reality set in for my brother, Jackie. The only football this little baby would be holding anytime soon would be a stuffed one and that’s not quite what he had planned for. So, Jackie would be waiting again for a brother, only this time the waiting would be for time and God to grow him. And God did just that.

My father was a brutal soccer coach. I watched him yell and scream at Jackie during every game he played. My mother would scold my dad and ask him not to yell at him so much, but he said he was only teaching him how to be a great player. And, that he was. David watched his older brother play and from the time he could walk David was kicking that ball around. As a teenager he had the same form as Jackie that coaches would mistake David for him. Their love of sports formed a teenage and young-adult bond. But the bond of brotherhood has sustained them.

Jeremiah 29:11 says, “For I know the plans I have for you,” declares the Lord, “plans to prosper you and not to harm you, plans to give you hope and a future.”

I have watched all my siblings—my older sister, my twin sister, my younger sister and my two brothers—grow into Godly young men and women. I know my mother was proud of all of us. I’ve seen marriages and children born and now we are watching the next generation come into this world as the six of us begin to have grandchildren. Over the years, there has been extreme pain and sorrow in the midst of great joy. And all the while God has been with us.

I received a call from my sister in law last week telling me the unexpected. Jackie has cancer. It’s news you never want to hear. I’ve heard it referred to as the big “C”.  But as someone pointed out to me the other day, cancer is just a little “c” when you have the big “C”, Christ, in your life.

So, we will walk this unexpected journey together as a family. We will lift him up to the Lord and ask Him to have mercy and heal him. We are already giving God the glory for all that lies ahead for my brother, his family, and me and my other siblings.

Many of you may be going through some deep waters of your own.  Don’t give up hope. Cling to the Lord. Prayer is a powerful thing. Draw strength from the one who formed you in your mother’s womb. Take comfort in the one who gives you breath.

Isaiah 41:10 says, “So do not fear, for I am with you; do not be dismayed, for I am your God. I will strengthen you and help you; I will uphold you with my righteous right hand.”

As I pray for my brother, I’d be honored to pray for you too!  Leave a comment with just your name or the name of someone you know who is in need of prayer. Be specific about the need only if you feel led to.

May God strengthen you as you face your mountain. May God grant you peace when fear creeps in. And may God comfort you when you hear unexpected news.

Who Declares Your Identity? by Angela Garrone
July 9, 2020

The Process of Reintroducing by Angela Scott
May 28, 2020