My heart was beating out of my chest. Sweaty palms and a queasy stomach are just some of what I was feeling as I was on my way to do something I had never done before.  What was I thinking, and most importantly, why didn’t anyone talk me out of doing such a crazy thing? 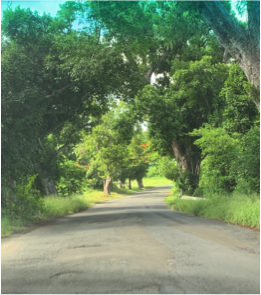 Every mile closer to the location seemed to make me more and more anxious. To tell you the truth, I wanted to turn around and say forget it, but it was too late to back out.

Had I prepared enough? Will they like it? Did I forget anything? Question after question bounced around in my mind. My thoughts were racing. I was unsettled and anxiety-filled.  As we drove, I yelled at the kids, my husband, and I would have yelled at the dog too, except she was home safe from my wrath.

Have you ever felt as though you bit off more than you could chew? Or felt insufficient for a task you were chosen to complete?  I have, and I certainly felt like it that day. I was slowly believing the enemy’s lies that I was ill-prepared for such a daunting undertaking.

As I got to the venue in the midst of all of my angst, I suddenly felt the peace of the Holy Spirit come over me and a still, small voice tells me “I have called you, will I not equip you?”. Immediately I started to feel a sense of calmness. I knew I had done my part by preparing my heart and practicing, so all that was left was for His anointing to flow.

“May he equip you with all you need for doing his will. May he produce in you, through the power of Jesus Christ, every good thing that is pleasing to him. All glory to him forever! Amen.”

Once I realized that God had already gone before me, and that His glory would be revealed through my obedience, I was ready for the unexpected journey to begin.  I found freedom in knowing that it no longer mattered whether the performance was good; all that mattered was that God would be glorified. He wanted my obedience, not my perfection; His anointing would take care of that. 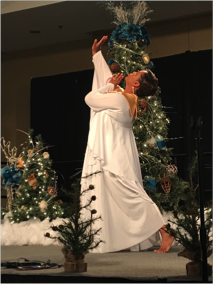 So, I did it! And I did it scared. I did my Praise Dance for my Father like no one was watching. I was willing to surrender to His will for me at that moment. And, despite the loud voices in my head telling me this was not only crazy but totally out of my character, God blessed it in a way that I could have never imagined. In an Ephesians 3:20 way!

“Now unto him that is able to do exceedingly, abundantly, above all that we ask or think, according the power that worketh in us”

I would have never imagined that this small step of faith would have led to a ministry being birthed. I let go of all rational thinking and let God lead me. I trusted Him. I put one foot in front of the other. Relying on Him just as a vision impaired person relies on their guide, and He led me into a season I didn’t see coming. He opened doors I never thought I’d be walking through and He gave me favor with every decision made. He made the path straight; all I had to do was walk in it.

Perhaps there is something God is telling you to do. You can be assured that it will definitely be something that will stretch you and take you out of your comfort zone, because He loves you too much to let you stay the same.  Do it! Do it scared! Your obedience will not only glorify God, but will take you on an Unexpected Journey.

As We Approach the New Year – Carry the Lesson, Not the Shame by Andra Pape
January 8, 2020

Merry Christmas from the Choosing Him Family
December 24, 2019

That’s All That Matters by Annette Burrell
December 18, 2019

When the Decorations on the Tree Don’t Bring Joy by Andra Pape
December 9, 2019